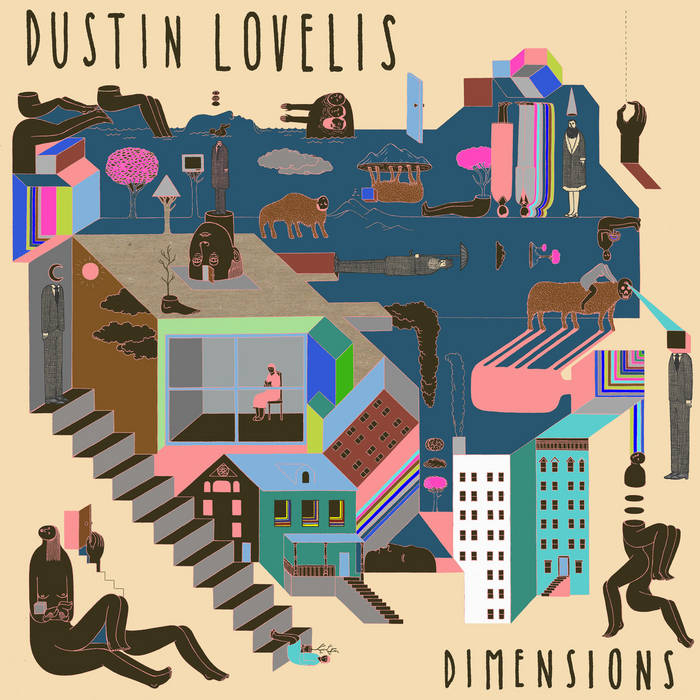 Composer, performer, and multi-instrumentalist Dustin Lovelis has been busy crafting songs in Long Beach, CA. Since Dustin’s late teens, he has toured the globe with a myriad of musical outfits, including The Fling (Dangerbird Records) as primary vocalist and songwriter. Taking a break from touring, The Fling went on hiatus with no concrete plans to continue. Fortunately, Dustin couldn’t stop writing songs and returns with an ambitious debut solo effort Dimensions, out on Porch Party Records on May 19th, 2015.

Dustin’s music is drenched in vintage and modern textures, while his fine-tuned pop-sensibilities rise out of whichever era ignited the inspiration. After The Fling dissolved, Dustin took over all writing responsibility. With a guitar, a microphone, and a bottle of whiskey, Dustin found his way through his influences and pinned his own demos to a multitrack. Without any input from band members, Dustin meticulously created his new DNA of sound with hints of The Everly Brothers, The Pixies, and The Beatles. He knew it was time to return to the studio.

Dustin recorded Dimensions at Elliott Smith’s former music home New Monkey Studios. He found the ideal compliments for his timeless sound with an insane amount of gear and incredibly talented musician friends. Elijah Thomson of the band Everest played bass and produced the album, and prolific composer and session player Frank Lenz lays down his dynamic drumming with classic fills. After two days, the basic tracks were finished. A few more instruments and vocals were added, and Dimensions was complete.

Press:
LA Record - Interview and Album Review
“Lovelis has turned long months of anxiety and isolation into one long beautiful night of an album, lit dimly by starlight but lit nonetheless…this down-but-not-over dynamic with power and precision…I don’t know how he did it, but I do know it’s very hard to do…it’s pop despite itself” -Chris Ziegler, LA Record
larecord.com/archive/2015/03/18/dustin-lovelis-dimensions-interview

"Off The Rails" Premiere
“The album places Lovelis squarely in the parade of vintage-sounding guitarsmiths such as White Fence and Smith Westerns, staring down tumult from within and without with beatific melodies and ascendant choruses. Lovely.” -Buzz Bands LA
www.buzzbands.la/2014/06/17/premiere-dustin-lovelis-rails/

"Idiot" Exclusive Song Premiere
"The tune “Idiot” itself is one of the brightest moments on the LP. With a ‘60s rock aura that sounds like it could have only been written in Southern California, “Idiot” balances its cynical lyrical matter with the beach-y mood evoked by its music. Lovelis breaks down the tune plain and simple to PopMatters: “This song is about being resistant to change, and realizing I am a dumb animal.”
www.popmatters.com/post/192406-dustin-lovelis-idiot-audio-premiere/

"Idiot" Stream on Buzzbands LA
"The album...reveals Lovelis’ warm embrace of ’60s and ’70s psych-pop, and on his woozy new single “Idiot,” Lovelis self-deprecates: “I’m a lonely kid / I’m too old to have thoughts like this / I’m an idiot / But I’m fine in my safety net.” It’s a good thing Lovelis is letting us have a look inside."
www.buzzbands.la/2015/04/17/stream-dustin-lovelis-idiot/